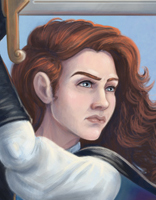 Born: October 3rd, 5982 A
Height: 5’ 9” (175 cm)
Weight: 68 kg (150 lb)
Eyes: grey, can look blue, green-blue, or violet depending on light and emotion
Hair: chestnut, curly (big curls not small), thick
Age (in 5999A): 16 going on 17
Other distinguishing physical features: long nose, “chipmunkish” teeth, long legs
Parents: Queen Dragana and King Mihajlo of Ardan
Crush: Gerrard DeVent
Sexual Orientation: Heterosexual
Companion: Emerald, a Unihorse
Favourite Treat: Chocolate covered roasted hazelnuts… Actually anything with dark chocolate.
Occupation: Queen-In-Training
Secret Occupation: Nenya, the Water Warrior
Unusual talent: Fencing. She is a Sword Master, undefeated since she was fourteen.
Hobbies: Reading, drawing and painting, exploring with her cousin and sister.
Dominant Element: Humans tend to be balanced and thus have no magic. However, Lauraliee has a bit more Water than any other element in her, which allows her to bond with Nenya, the Water Spirit.
Weaknesses: Second-guesses herself. Lacks confidence. Perfectionism. A know-it-all. Terrified of being in the spotlight. People-pleaser.
Fun Fact: Lauraliee is based on Mili Fay. Her character was changed over time to suit the story, but she still retains some of Mili's characteristics, looks, and colouring.

Lauraliee wants to lead an ordinary life, so of course she was born a princess, and not just any princess, but next in line for the throne of Ardan. If she had her way she would spend her life painting, travelling, and studying. Instead she has to constantly fight her fear of being in the spotlight and rule the Land of Ardan as The Queen the moment her mother decides to retire.

Lauraliee would gladly abdicate in the favour of her sister, but she does not want to disappoint her parents and other adults in her life. If she could find the courage to disappoint them, a regretful part of her believes that Nikolina (or her cousin Vladimir) are not quite up to the job. She also feels guilty for wishing to pass on the crown since Fates decreed she is to be Queen, and thus the crown is her responsibility.

Lauraliee spends her life wishing for personal freedom, but takes on more and more responsibilities as they are shoved at her. When she gets an unpleasant task she will privately rage about it, but then would take a deep breath and do what needs to be done. Though she is a dreamer, she is also very organised and practical.

Lauraliee feels things deeply. She thrives on praise, and is diminished by criticism. She knows she is far from perfect, but at all times she tries to be perfect and do what is expected of her. She always feels as if she cares about the people in her life more than they care about her. She is not sure if she has real friends, or if her friends are with her because some day she will be The Queen.

She exercises her frustrations through fencing, and by flying with Emerald.

Lauraliee loves her family dearly. She would sacrifice herself for her family and the good of Ardan without a second thought.

“It is not as if I want to be a princess. Since I was four years old I've spent every birthday, shooting star, wishbone, and lost eyelash wishing I did not have to be a princess!” ~ Lauraliee Lumijer 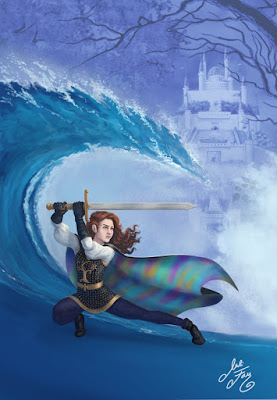 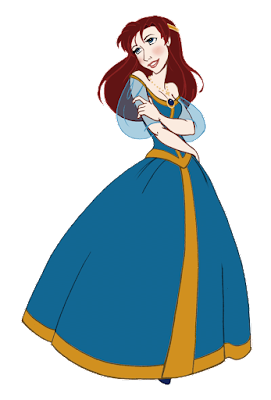