If you are curious as to what I'm doing all month between publishing the episodes, I'm about to reveal my process.

I have already written and polished the first 9 episodes of the series (getting sick at the end of last year, I hope I'll find the time to write Episode 10 soon).

Those 9 episodes are with my editor. He is very busy, but thus far he did manage to get each episode done by the 15th of the month. I need at least 15 days to get the book up and running on Amazon.

The first thing I do is read through my editor's edits and make changes to the text. Sometimes the edits are few, sometimes not. I had to rewrite large chunks of Chapter 12 in Episode 4. One of the things my editor pointed out is that I need more description in certain areas to bring the scenes to life. As an author, I know what's happening inside my head, and though I try to give my readers enough description to bring the picture to life, sometimes I miss my mark. I was flabbergasted at his comment, because my past reviewers suggested I should write shorter descriptions; however, when my editor pointed out the passages, I realized he was completely right.

The above is why it is so important to find a good editor, not just someone to polish your grammar, but someone who can point out other issues — such as the flow of the story, unvarying sentence structure, too much or not enough scene setting, wrong word choices...

After making changes to my text, I use the Text to Speech feature in MS Word to have the computer read the text back to me. This helps me notice most typos, and the general flow of the story. I may go through this process a few times, until I pass through the text without making any changes.
Only then do I markup my text, make an ePub file for eReaders, adjust the ePub for Kindle, and crate a Mobi file.

I read through the Mobi file to make sure there are no errors.

Then, I give the file to my sister to read. Every single time I hope she'll return my iPad with “Wonderful! Nothing to change.” in the comments. No such luck. She usually finds a bunch of things that she thinks could sound better. We usually argue about the use of commas. Also, my sister is a doctor who writes medical research papers, so sometimes we argue over style — I do not want my book to read like a medical journal, and occasionally the rules of grammar need to be broken to bring forth the feel of the story. For example, if a character speaks without pauses (nervous, frightened, or chattering), I as a fiction author may wish to write a run-on sentence, or a sentence with no punctuation.

Regardless, her edits make my story sound better, too. After incorporating my sister's changes, I give a little prayer that there are no more errors and publish the text on KDP.

This is why I need those 15 days. The remaining time in the month, I spend working on other projects. In the coming month, I hope one of these will be writing Episode 10.

Warrior of Virtue Epic YA Fantasy Series Episode 4 is not the only book I'm releasing this month. I'm going to release my first ever sketchbook, The Phantom of the Opera Inktober 2016 Sketchbook. I'm nervous and excited, but mostly I'm wondering how I'll ever be able to get everything done. Regardless, you are all invited to attend my upcoming book launch on February 4th, 2017. 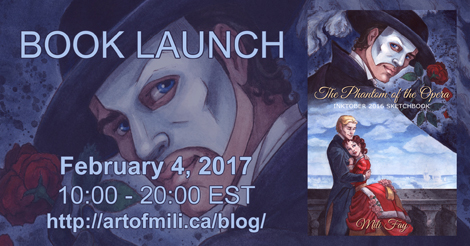 You can read more about the sketchbook project here. Otherwise, I hope to see you on February 4, 2017. Trust me if you are a Phantom or Mili Fay Art fan, it is an even you do not wish to miss.

Mili Fay, an award winning artist, trained as a classical animator at Sheridan College, but when computer animation took over the field, she decided that she loved drawing more than animating. In November of 2011 she created Mili Fay Art determined to support the world one artwork at a time. Today, she passionately creates imaginative artwork and stories, always graced with a humorous modern twist.

Currently, Mili is working on an epic YA fantasy series, Warriors of Virtue, about a reluctant princess, Lauraliee Lumijer, who grows into a queen as she defends Ardan from dragon people (people that change into dragons) and a hermit dragon prince, Diamond Pendragon, who is forced to rejoin Ardanian society and reevaluate his convictions.

"Together we support the world one artwork at a time."