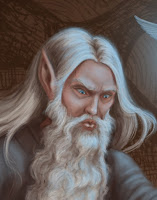 Height: 6' 6" (198 cm)
Build: skin and bones
Weight: indeterminate — wizards can change their weight and size at will
Eyes: pale, blue-grey, dotted with unusually small black pupils
Hair: silver-white cut to mid tight, long beard and mustache
Age: In 5999A Ardanian's believe him to be at least 200 years old. This author can tell you, he is much older.
Other distinguishing features: Elven ears; long, colour-changing nails; aquiline nose
Parents: Classified
Lovers: Classified
Sexual Orientation: Bisexual — all wizards are.
Companion: Wise Owl, Artemis
Staff: Silver, topped with a phoenix spreading his wings and a blue stone.
Favourite Pastry: Cinnamon Rolls
Occupation: 5999A - tutor hired by the Royal Family of Ardan
Hobbies: Reading, flying, and experimenting.
Dominant Elements: Water and Air.
Weakness: Overthinks things, then when something happens he acts impulsively. Tends to believe he knows best all the time. Pride. He cannot see the faults of people once he loves and trusts them. Incapable of letting things go. Lauraliee Lumijer (she is the daughter he never had).

Cornelian grew up in an Overworldlian orphanage. He was found wrapped in a scarf stitched with his name to identify him. He became Cornelian the Great when he stole Dragon Lord Malachite's Blood Ruby with a simple switching spell, rendering him powerless long enough for Warriors of Virtue to defeat him in The Great Battle.

When he was seven years old he was training with a group of wizards. He was able to perform the Curio Spell on his first try.

His past is classified. To be revealed throughout the series.

He is wise, kind, neat, and fastidious. He has a great sense of humor. He is also not afraid to get his hands dirty and is a capable warrior.

"Failure is naught but Success waiting to happen." ~ Cornelian the Great 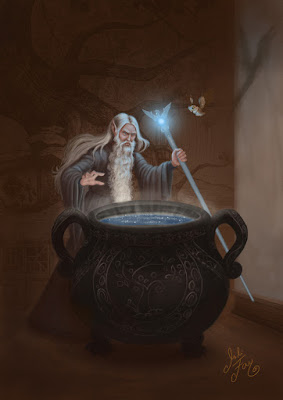 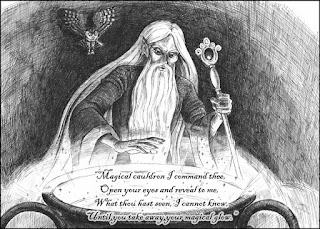 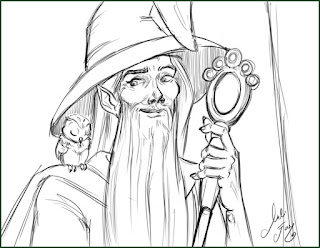